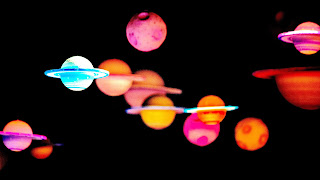 Photo by David Menidrey on Unsplash

C.S. Sherin, 1 April 2020; updated 5 Apr 2020
Saturn has been in the sign of Capricorn since Dec. 19th, 2017.
On Sunday March 22nd, Saturn officially moved into Aquarius.
Consider this a preliminary dip of Saturn's toes into Aquarius. Saturn will stay in Aquarius now through July 1st of this year, and then will retrograde back into Capricorn for 5 months (through Dec. 17th). So, for about 3 months, we will get a preview of this new energy of Saturn in Aquarius.
After the retrograde in Capricorn (an energy we are pretty familiar with by now, on some level), Saturn will return to Aquarius on Dec. 18th of this year, and stay there through March 7th of 2023. For about 2.5 years, starting now, we are entering into another Aquarian Saturn flavor. (The last time Saturn was in Aquarius was in February of 1991, and its last day there was on January 27 of 1994.)

In both Capricorn and Aquarius, Saturn is at home -- a true and stable version of itself, as an energy and influence in our social and collective lives. Even though both signs are harmonious with Saturn energy, they are quite different expressions, with totally different tones of focus and outcomes.
Saturn is a social planet--it isn't personal to us, and isn't distant. Saturn most influences our relationships out in the world, and to and with authority and social structures. On the mythological level, evolving into present day, Saturn represents layers and layers of powerful archetypes that are overactive in our culture and world: patriarchy, hierarchy; enforcement of laws and rules (with punitive tendencies), masculine dominance, taskmasters, dictators/authoritarianism, orthodoxy and dogma, rigor, and unyielding structures, like institutions.
What we have inherited from each age/era adds another layer to Saturn for us. We carry the residue of many coups, genocides, imperialism, colonialism, and archaic holds on power and ceremony/ritual. The mythology from which Saturn arose for us in the European/Western world rests upon a story from ancient Greek (and Roman) mythology. Good to note: The Greek inevitably inherited some of their beliefs from ancient Babylonia (Chaldean) and Egypt (with Persian/Mesopotamian influences). And, the Romans loved to adopt Greek myths as their own, translating them into different names and perspective. The Greek god, Cronus, became Saturn in Roman mythology.

Cronus was the youngest of the Titans (2nd generation of deities, born from the primordial deities). Uranus and Gaea were the primordial parents of Cronus/Saturn. Uranus, father sky, was being a jerk--not letting their children be born, so Cronus (with mother's help and encouragement) was the one to cause separation between his parents, so that they could be born. Cronus/Saturn became the leader of the Titans through his courage and heroism (castrating his father in order to be born, causing separation between earth and sky) at birth.
We have to remember that these are myths, symbols, and archetypes--not human people. The deities are heavenly bodies, with different ways of being. Taking the Greek myths literally really won't be helpful.
Cronus/Saturn's downfall was in becoming fearful of his own children due to a prophecy that told of his own children overthrowing him. So, Cronus/Saturn was the one who devoured ("ate") his children--all except the youngest, Zeus/Jupiter--who was protected against that fate by his mother. (See a pattern here?) When Zeus/Jupiter was old enough, he used a sneak attack on his father, Cronus/Saturn, with a drink that forced Cronus/Saturn to basically throw-up all the children he had devoured. In other words, all of Zeus/Jupiter's siblings were hidden underground within Cronus/Saturn, and were released. Zeus/Jupiter's siblings then joined him to begin the 10-year war to overthrow the Titans--their parents and others, which ushered in the era of the Olympian gods and their council of 12, with Zeus/Jupiter as the leader, god of the gods.
From a certain perspective, this was a loss in many ways, as the rule of Cronus/Saturn ended, so did the abundance of food and other resources that were enjoyed without much effort or labor for humans, and the gods no longer walked among humans--the end of "the Golden Era."
By the way, Cronus/Saturn is often confused with the primordial god, Chronos, who is the god of Time in Orphic Theogonies.
Cronus/Saturn isn't that god, he is a Greek/Roman god directly related to security and abundance found around resources: food/agriculture, the harvest, money, possessions and status that brings ease. Cronus/Saturn was beloved by ancient Rome and Romans in particular.

Saturn, for each of us personally, presents us with what we could look at as soul-level tests (throughout life) on our levels of discipline, responsibility, boundaries, authority, ingenuity, and perseverance.
We receive those "tests," most often, in any manner and form of inner and outer experience that delays, blocks, limits, or stops us in some way. These challenges can be life-long for some, and only cyclical or for a certain period of life for others. For those who work hard and are self-disciplined, the Saturn energy of the father can be experienced as more appreciative and supportive. For those who avoid, deny, and dwell in self-pity, instead of persisting, Saturn energy can become incredibly oppressive, harsh, depressing, and defeating. Having said that, those are ideals. Nothing is that clear and clean here on Earth. So, all of us may or may not be completely disciplined or responsible, and we still face the challenges of the Saturn energy in our lives, or not as much. Some will get a taste of the whole spectrum and potential of Saturn, and others may only experience the father energy as positive or via hero worship or blind trust of/in authority figures.

Aquarius is a mystical type sign of the zodiac. The 11th house, ruled by Aquarius and Uranus, is a mystical bridge between the world as we know it, on into the mystical, cosmic, and humanitarian realms. The water bearer, though passionate, is an Air sign--loves movement, travel, events, and communication and thought processes and expression of all kinds. That energy is detached and impersonal, yet holds a unique power to bring empathy and compassion action through the vessel being carried--of perhaps, life-giving, regenerative waters. There is a special connection possible here with the health of our water and resources and our spiritual awareness--as we move forward with these Aquarian energies at the social and collective levels.
For both the United States and the Internet, the movement of Saturn into Aquarius is in the 3rd house of communication. This shift will be focused around how we think, communicate, run errands, relate to neighbors (other countries) and siblings (state to state).
Since Aquarius is ruled by Uranus, the energy of surprise, abrupt change, and inventions--strange/unusual events and behaviors come into a house that deals with local, regional, and practical ways to network/communicate, and approaches to thought and day-to-day relationships. As we are in the midst of such a disruption, it is well and good to think outside the box. "Necessity is the mother of invention" is a phrase that surfaces at this time.

Saturn retrograde isn't unusual at all. Saturn spends about 2.5 years in a sign, and will retrograde for about 4.5 months per year. So, the period from July to mid-December serves as a review of all the events that have occurred through Saturn influence in the Capricorn energy in recent years. It is kind of like when you leave a job or relationship that you have been in for a quite a while, and move on to something else. You are immersed in that new job or relationship, but may spend a large amount of time still processing and reviewing lessons, insights, and styles of being from the previous experience. This retrograde is steeped in the Capricorn energy still, but make no mistake, we have moved on into new territory, which will be going forward full force by Dec. 19th.
How this affects our elections and modes of communication is up to us. We can utilize the ambition of Capricorn during the retrograde to push forward towards the goals of Aquarius. That is my hope. It will, at least, be a time to review how we interact with authority, the patriarchy in all its forms, and with our sense of security and responsibility related to food, water, shelter, possessions, status, and money.
The Aquarian energy coming in, and present now, seeks to shift the Capricorn approach to all of this for good!

How will we live this out? That is the beauty of all the octaves of potential that we carry together as a collective at this time. There is a lot of potential for good to come about from every struggle, hardship, and loss that we face. I don't serve you best in predicting specific outcomes and events. That is because we are presently co-creating what will be in the present moment. We are meant to improvise a new path together, hopefully one that utilizes the amazing beauty and truth of us, instead of the manufactured conditioning that has taken hold for so long.
Aquarian energy upholds unique gifts, insights, and perspectives as important and valid to the whole. This is time to explore new ways of thinking, being, and communicating--with discipline, responsibility, and healthy boundaries for all life. This will require radical change.
For a personal look at how Saturn in Aquarius impacts you on a personal level, look to the house and sign that Saturn was in when you were born, and what house Saturn is in now for you. You can calculate your birth chart for free at astro.com or cafeastrology.com.
If you want my insight on your personal Saturn dynamics, message me on my website and I will be happy to provide a short email response for free, just for you. Just mention that you read my blog about Saturn in Aquarius.
C.S. Sherin (Chandra), Wild Clover Astrology 2020©. You are free to share this content via social media, unaltered and with the author, link and copyright intact. Any alterations or lack of credit is prohibited.

Chandra
Hello! My name is Chandra (pronounced like "channing"). Chandra means "Moon" in Sanskrit. My author name is C.S. Sherin. Thank you for stopping by! This astrology blog is companion to my services on my website, Wild Clover, WildClover.org. You can also find me on IG @wildclover_astrology.

C.S. Sherin (Chandra), Wild Clover Astrology 2020©. You are free to share the blog posts on this site via social media, unaltered and with the author, link, and copyright intact. Any alterations or lack of credit is prohibited.